It’s dead of summer. Ain’t gonna bore you with the chit-chat. Enjoy.

Have you noticed this camera tower at the entrance to Key Biscayne? 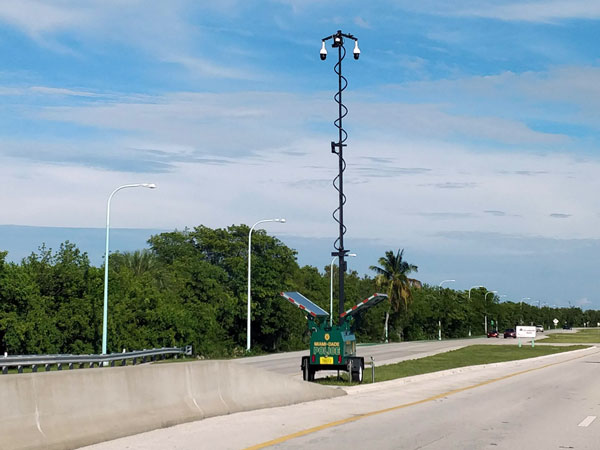 According to MDPD, it’s there (and another one on Dog Beach) because of an uptick in crime around the parking lots in the area. The units track cars and license plates and the MDPD can review the footage if a crime is reported. It’s not clear if they’re keeping a permanent record of every car.

A while back, the KBPD actually requested the Village install license plate readers at the entrance to the Key, but the Council deemed it a bit too Orwellian. 🤷‍♀️

Buying (mari)time The City of Miami has decided to, for now, not go forward with plans for a redevelopment of Rickenbacker Marina. Miami had sought bids for a grand project that included new public spaces, restaurants, and expanded facilities, but voted not to act at a recent meeting. No word on what they’ll do next, but for now the inevitable commercialization of Virginia Key is on hold. 🤑

Pump it up Buried in this article about the Key’s plans to address future flooding is the news that a pump station, ala Miami Beach not Sweden, is coming to the area around KBCS. The pump will take two years to install, but it’s not clear where the pump will be placed, when the project will start, or when the Key will be underwater. ⛲️

You are the product It was discovered this week that the Florida Department of Highway Safety and Motor Vehicles has been selling your information to marketers, debt collectors, and the like so they can target you with robocalls, junk mail, and other crap. It’s especially egregious because the FHSMV is the only game in town to get a state ID, and they don’t mention the practice anywhere or let you opt out. 🔩

Tit for tat In the continuing saga of the kooks vs. the guv’ment, someone filed a complaint with the Miami Dade Ethics Commission accusing three council members of conflicts of interest for their ties to the Key Biscayne Community Foundation. Councilmember Ed London donated money to the KBCF, while Councilmember Brett Moss and former Mayor Frank Caplan volunteered with groups that received Village funding.

They forgot the current mayor, Mike Davey, who is on the 4th of July Parade Committee, but please don’t tell them because the committee can’t afford to lose more volunteers. 🙄

Everyone's out of town

Questions, comments, tips, or to get together and wonder about what’s happening with the Oasis 🌴, write to hi@tropicalrag.com.

Stay cool out there. See you next week!