The year is over and if you’re like most people, you’ve already forgotten about all the things that had us yelling at each other the past twelve months. Well not to worry, as it’s all written down below. It’s the clip-show edition of the Rag. Enjoy. 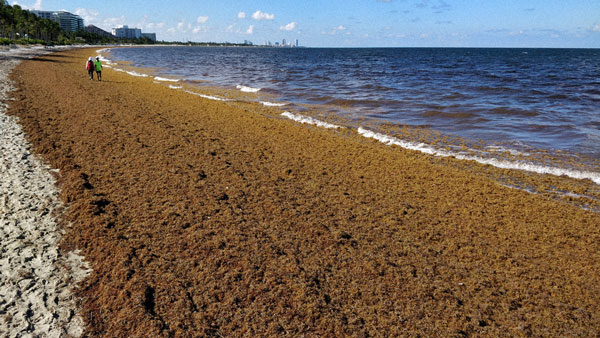 Seaweed season 2019. You said you would never forget.

But what have you done for me lately?

We can start this recap off in March, as that’s when this lowbrow newsletter got its start. Before then, no one really knew what the hell was happening on this island.

March was when we were all bickering about burying the power lines and who was going to pay for it. Ultra was about to take place on Virginia Key, and the whole island was ready with the glow sticks and Vaporub. We got all worked up, but by April both these items were on the backburner. This is also when we first heard that the Beach Club was broke.

In May we found out Ultra was definitely not coming back, and our EDM dreams were dead. The first seaweed piles for the year started showing up on the beaches, and in a swift change of the guard, the Beach Club shake up was complete.

June was chock full of stories to get hysterical about: property values on the Key were tanking, the chats were peddling conspiracy theories; one even made it all the way to the council, resulting in the KBCF being accused of impropriety. The Village fell victim to a ransomware attack, hot dudes did tai chi with all the mommies, and pizza was eaten for science.

A crocodile was spotted at the beach in July, and now crocodile sightings are as common, and credible, as UFOs in New Mexico. The same month, the ban against texting and driving went into effect, so no one uses their phone in their car anymore 😏.

Some maniac shot a cyclist dead on the big bridge in August, while documenting the entire thing on social media. Not to be outdone, a guy shooting some iguanas in his front yard caused a county-wide tactical response. A councilmember got scared of black people, the KBCF thing was forgotten about, and we braced for Hurricane Dorian.

In October we heard of proposals for a new library, but opposition quickly turned that topic into a dumpster fire. The council then banned fishing from the Mashta bridge, ’cause Mashta people didn’t want to look at stinky fishermen.

Finally, November came and went with little incident, and the most interesting thing to happen this past month has been the pipedream proposal for the entry block (which probably won’t happen).

Is the Oasis window open yet?

A vision for the future

Weren’t we supposed to have flying cars by now? Instead all we got are these dorky looking scooters.

End of the decade

Questions, comments, tips, or to watch TV and fall asleep at 8pm on New Years Eve 😴, write to hi@tropicalrag.com.

Have yourself a very happy new year. 🥳