Man, it hasn’t been this cold since 2010. It’s a little warmer than back then, but I still saw some heavy winter coats and insulated boots walking around yesterday. It’s always jarring to see that contrasted with the sun and the palm trees. 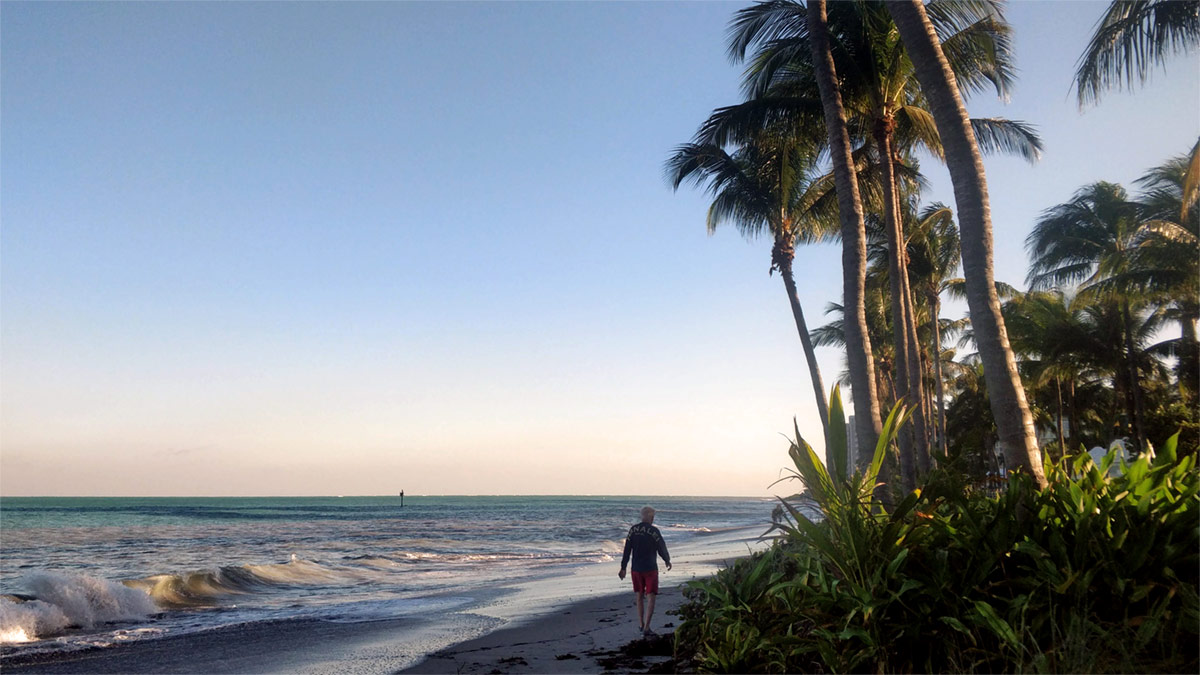 The light always looks a little different in the cold, and the tide is high.

A girl was accosted last Saturday on the island. The perp, a 30-something white guy with dark hair and a beard, ripped the girl’s shirt and said some lewd things to her. Somehow she managed to get away, and reported the crime. When detectives showed up to question her, she told them she had made it up. Good thing too, because that description she gave perfectly describes this writer. 🧔🏻

This one-day cold spell has iguanas falling out of the sky. The invasive lizards can’t handle cold weather, so they either die or go into a stunned state. KB Public Works was picking them up yesterday morning, and they called a company over to “dispose of them properly”. Not much more to say, but if you’re feeling morbid there’s a photo in the article of a bunch of iguanas piled in the back of a golf cart. 🦎

Did you know you need a permit to replace your carpeting here on the Key? I guess it’s not surprising, you need a permit for almost everything. This isn’t one of those rants about “muh freedom to build wut I want!!,” but about how carpets got caught in the crossfire of a new way of doing things.

Before 2017, the Building, Zoning, and Planning Department (BZP) was making money every year. This was kind of strange, because normally, and legally, public services aren’t supposed to make a profit. And we’re not talking a couple of thousand bucks here; the BZP had ~$1m+ in the bank. That’s money that, in theory, people overpaid for their building permits.

At the time, permit fees were calculated as a percentage of the cost of the project. This had the consequence of discouraging remodeling over building new (so long, Mackles!). This method also had the problem that those in the know could low-ball their costs and pay less for permits. If you browse old permits, you can find some really low estimates for big projects and accordingly low permit fees.

This all came to a boil when Key Colony III asked for a permit to paint* the building, presumably stated the real project costs, and the permit fees came out to ~$360k (for that kind of money, you could have a well-paid inspector watch the paint dry for 8h/day for two years). From there, a strongly worded letter pointing out this absurdity was sent to the Islander by KC board member Antonio Camejo, presumably the powers that be saw it, and arbitrarily BZP reduced that fee to ~$10k.

At this point people in government started realizing something was up at BZP, and that this profit carryover, the fee calculation, and the way it was handled was not working. Was it nefarious? That we don’t know, as the press at the time didn’t investigate and the Council moved quickly to remedy the situation without looking backward.

They eventually changed the fee calculation following expert opinion and precedent. The new calculation is based on square footage instead of the cost of the project, which is deemed more fair and less subject to interpretation, but that’s where we come back around to this carpet business.

A carpet, bought and installed, could run you as low as $1.50/sqft. And yet the new permit fees put you in at $1.30/sqft. That means if you need to replace the carpet in your place, you could pay almost 100% of the cost of the project in permitting fees.

Ideally, there would be some sort of arrangement when this kind of disproportionate fee comes up, and you wouldn’t have to write a letter to the Islander to have it happen.

Bonus: rumor has it that there’s some poor sap on the Key who has ~$30k in permits open from the old fee schedule, who today would be charged a tenth of that. They didn’t get the memo about sending that letter.

Regarding last week’s talk of a public bayfront:

We have to thank Mayor Joe Rasco for identifying this spot on Hacienda Canal for beautification 20 years ago. The Village provided benches and landscaping.

We got it all

Remember when you had go drive off the island for this stuff?

Questions, comments, tips, or to go for an refreshing swim in the cold 🏊‍♂️, write to hi@tropicalrag.com.

*Because there’s no online archive of this stuff and it’s all from memory, every last detail here may not be 100%, but you get the gist of it.