What a week. Masks are off, bars are open, we’re licking each other’s faces again, covid is out of sight and out of mind, school’s in session, and our local political scene had a little fire. 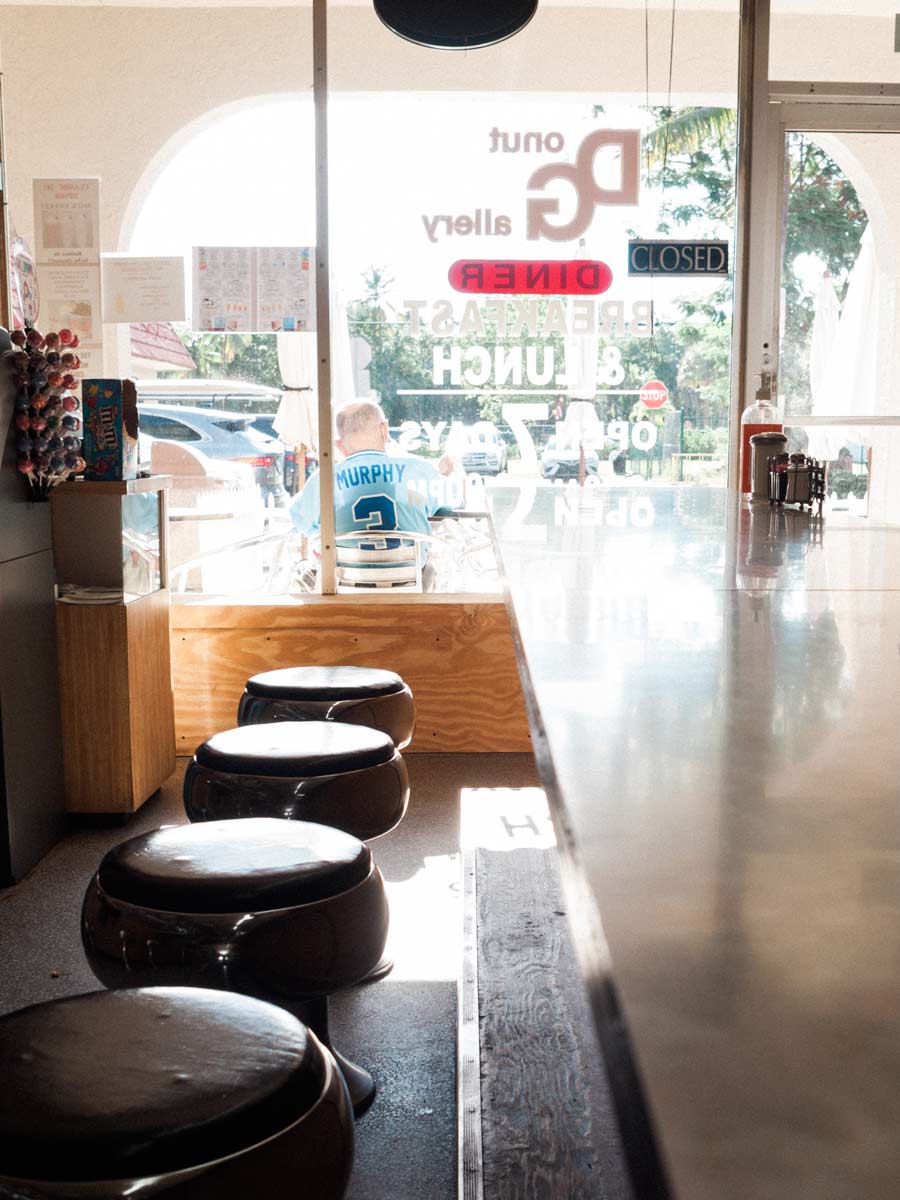 How much will breakfast be today?

Mask on, mask off The party is back, guys. No more masks in public, restaurants can open all the way, bars can open, and schools must open.

That’s all according to Governor Ron DeSantis who issued an order on Friday moving all of Florida to phase-3 of the covid reopening. The move came suddenly and swiftly, and caught local leaders off guard as it usurps most local restrictions. This is great news for those who can’t wait to hit a sweaty, crowded bar, and less great for everyone who would rather they didn’t. 😷

Can’t blame her Have you been paying attention to the state of local politics in the past few weeks? It’s a dumpster fire, and so this news, while surprising, fits right into the trend.

Andrea Agha, the Village Manager, has decided to call it quits. After leading a notable budget process last month, the manager resigned on Friday. She didn’t give a compelling reason apart from saying that it was time, and she’ll stay on for another 90 days until we find someone new.

Sunny place, shady people Miami-style politics have crossed the bridge into the Key this week. Someone spread a flyer claiming to be the official Republican voting cheat-sheet for the Key, endorsing three local politicians. The flyer, which didn’t have any claim of legally-required ownership, was disavowed by the local Republican club who says they don’t endorse candidates in races with multiple Republicans. Who paid for it is anybody’s guess. 🌞

No option off the table What’s easier than winning a vote? Making sure it doesn’t get counted in the first place.

David Winker, the lawyer who threatened to sue to make sure cyclists could come into the island two months ago, along with resident Gustavo Tellez, are suing the Village claiming the general obligation bond referendum is not valid based on some technicalities. This could nullify the election, though the Mayor thinks the Village will prevail. 💯

Ah, the Winn Dixie. It’s a love/hate relationship. On the one hand, it has a bunch of annoyances, and on the other, we need to eat. Today it’s not about bitching but more about confusion: who is buying some of these products?

I’m not talking about niche ethnic food, or all your various nut milks which are now the rage with the nut milk crowd. It’s the combo of niche product and way too much shelf space that makes it to this rant.

To start off let’s go with something fairly innocuous: Keez Beez honey. Honey purportedly made in the Florida Keys. In case you didn’t know, we have a guy named Ron on this very Key and he makes honey. Find him and you can get real Key honey minus the excessive use of Zs. 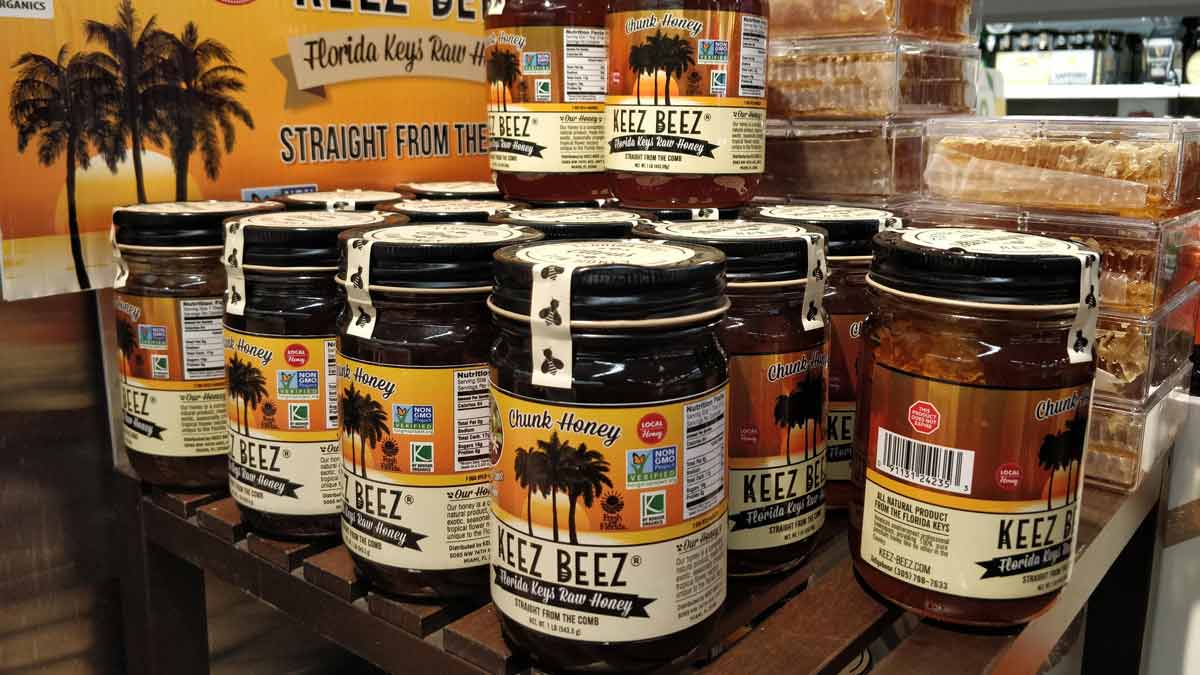 We move along straight to the freezer aisle which is where most of the oddities sleep. A lot of foods have benefited from advances in freezing, such as frozen vegetables. Jimmy Dean (who I like to picture as some sort of arctic country singer) has decided that they would use the miracles of freezing to freeze entire breakfasts made with dubious ingredients and 90% sodium. 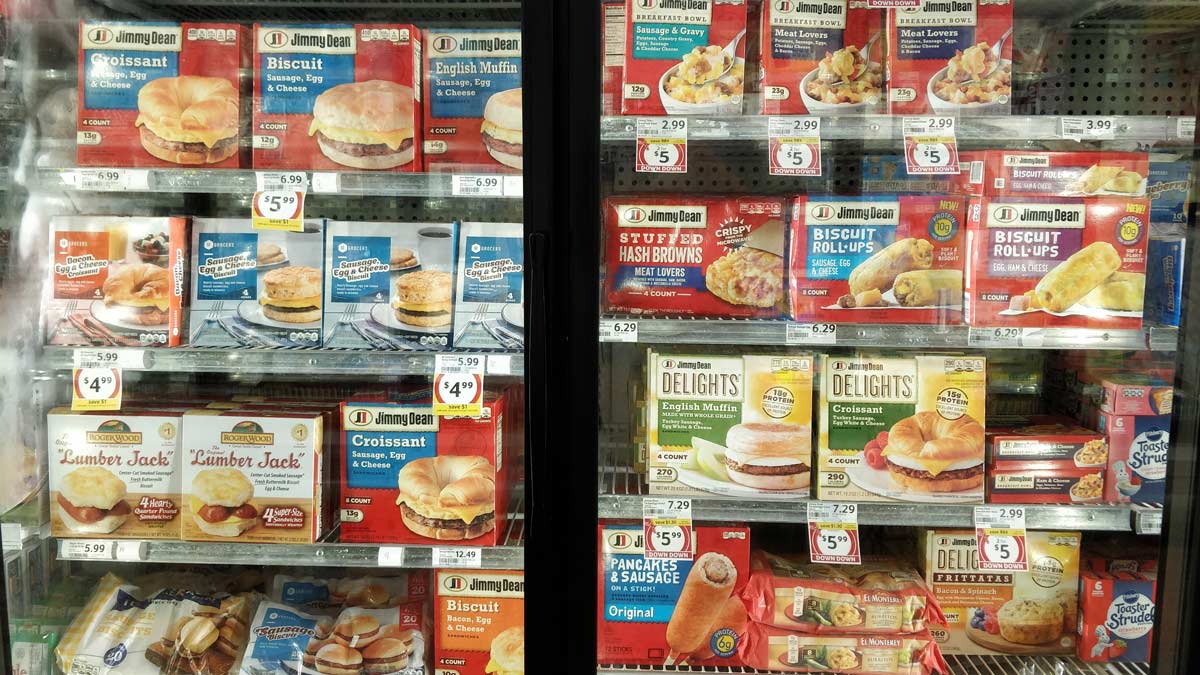 I could see maybe a few of these products working on this island, maybe with the single, rolex-wearing-guy crowd that dines out of a microwave. But how big could this crowd be to warrant ~50sqft of frozen egg based breakfasts? And who of you is eating these turd-shaped breakfast logs? 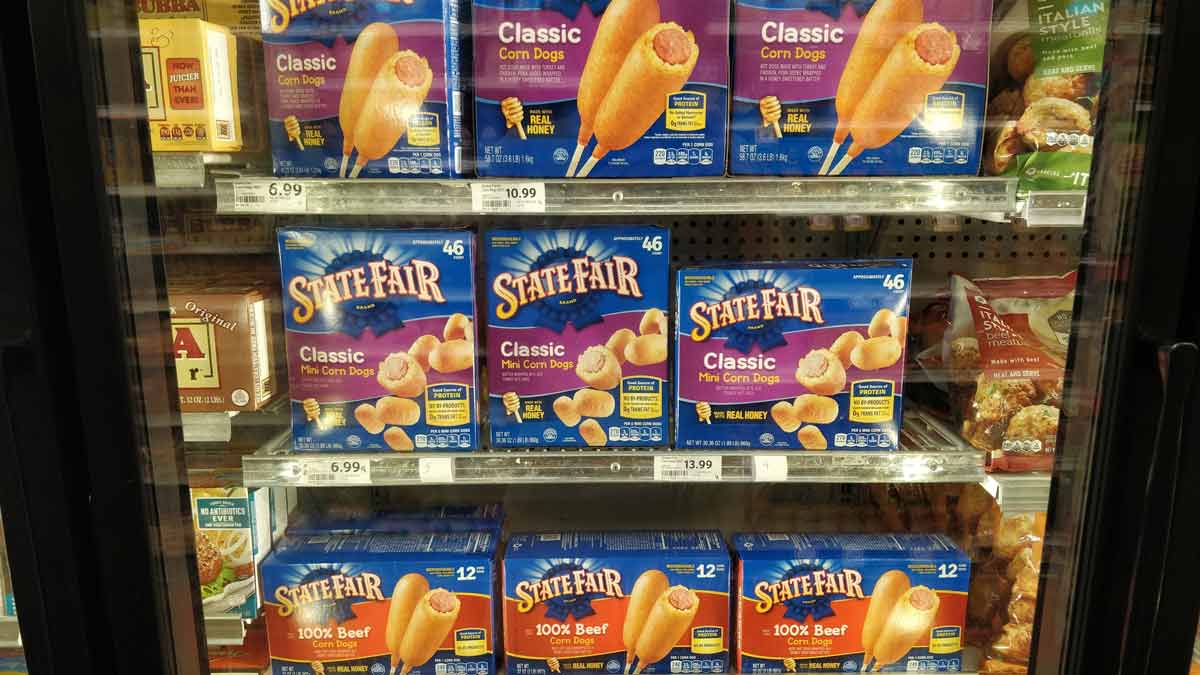 Next up, corn dogs. Tasty when done well, for sure, and hard to make at home. Never seen someone eat one outside of the school cafeteria. Yet we’ve somehow got enough corn dog volume on this island to dedicate a floor to ceiling panel in the aisle for these.

Moving on to the dairy aisle, we’ll make a pit stop for eggnog. I personally like a good homemade ‘nog, and I’ve heard that some people like the store-bought flavor. But I’d be surprised if even 5% of the island knew what it was, and of those, only .001% liked it. Yet here we are in back-sweat September, with 7ft of eggnog on the shelves. 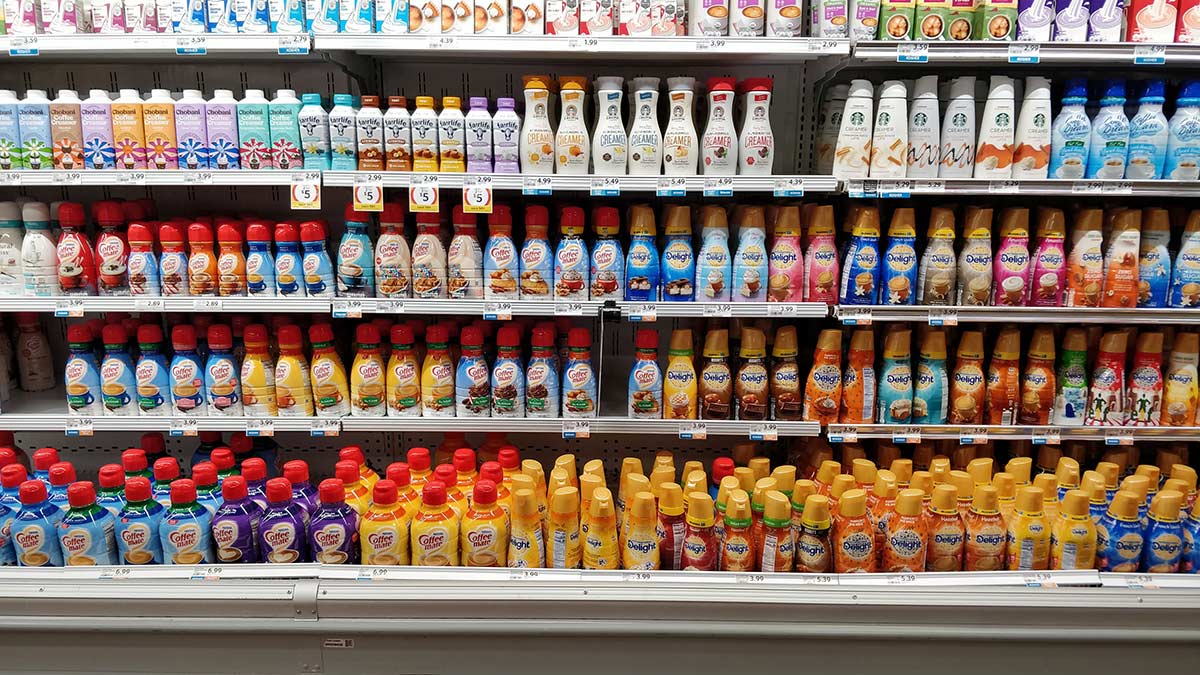 They've got all the fav flavs like Cinnamon Toast Crunch and Cheesecake.

This part of the Winn Dixie is the most bizarre of the whole bunch. It’s like 80sqft of coffee creamer. While the rest of the dairy section is often low on stock, the creamer is always there waiting. In case you didn’t know, which you probably don’t because no one seems to buy this stuff, coffee creamer is some kind of oil-based milk substitute for coffee. Winn Dixie, we have nut milk now.

It's gonna be a sad birthday for little Timmy.

We round the corner to the nasty cakes section. Winn Dixie has some appealing if a bit too sweet pies they sell, and they have these cakes. They’re always there and they look like the fake dessert cart at TGI Fridays. Incomprehensible how there’s enough volume to put these out day after day. 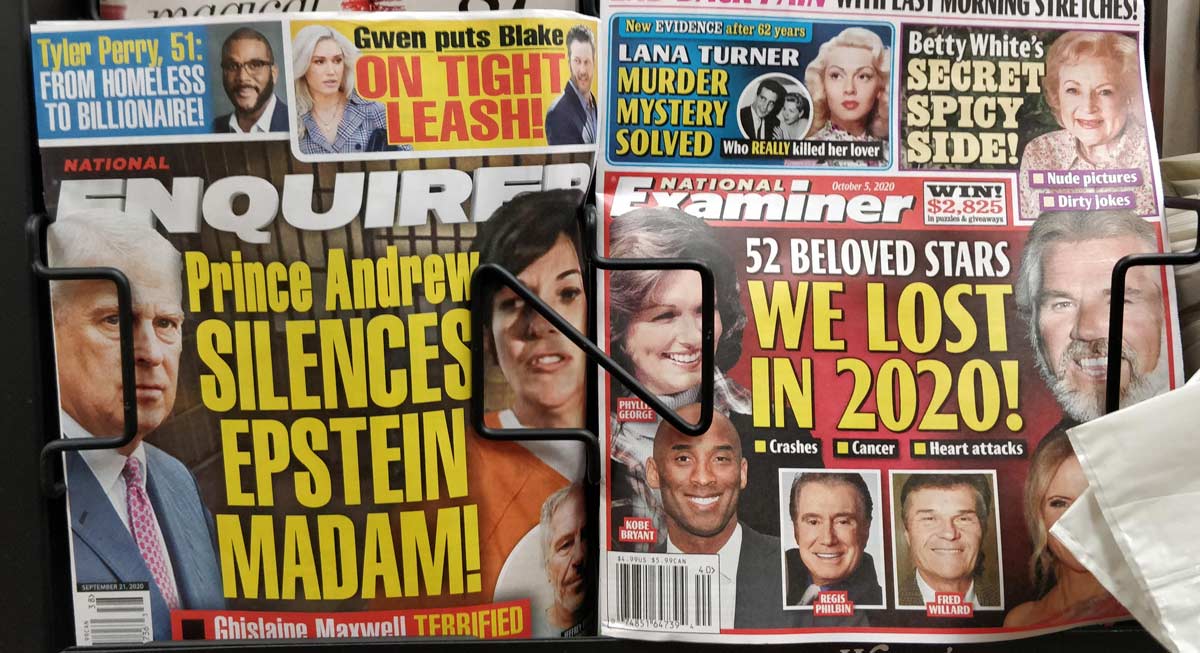 The lamestream media would never show us what JonBenét Ramsay looks like without makeup.

Finally, we finish it off with the tabloid magazines, especially the Enquirer and the like. These are actually very fun to look at, though it’s hard to imagine who is buying them week after week at $6 a pop.

This was only the tip of the iceberg. There’s still Salisbury steaks, frozen pastas, really awful flower arrangements, and more over there. If you buy any of these products on the regular, please send a photo of you eating it to hi@tropicalrag.com.

Questions, comments, tips, or to look for UFOs in the night sky together 🛸, write to hi@tropicalrag.com.

Next week some rants on politics and we’re eating empanadas. Toodles!