Another issue on the wonders of eating in KB (spoiler: it’s not that wonderful). This time we ate way too many empanadas in way too little time. 🤢 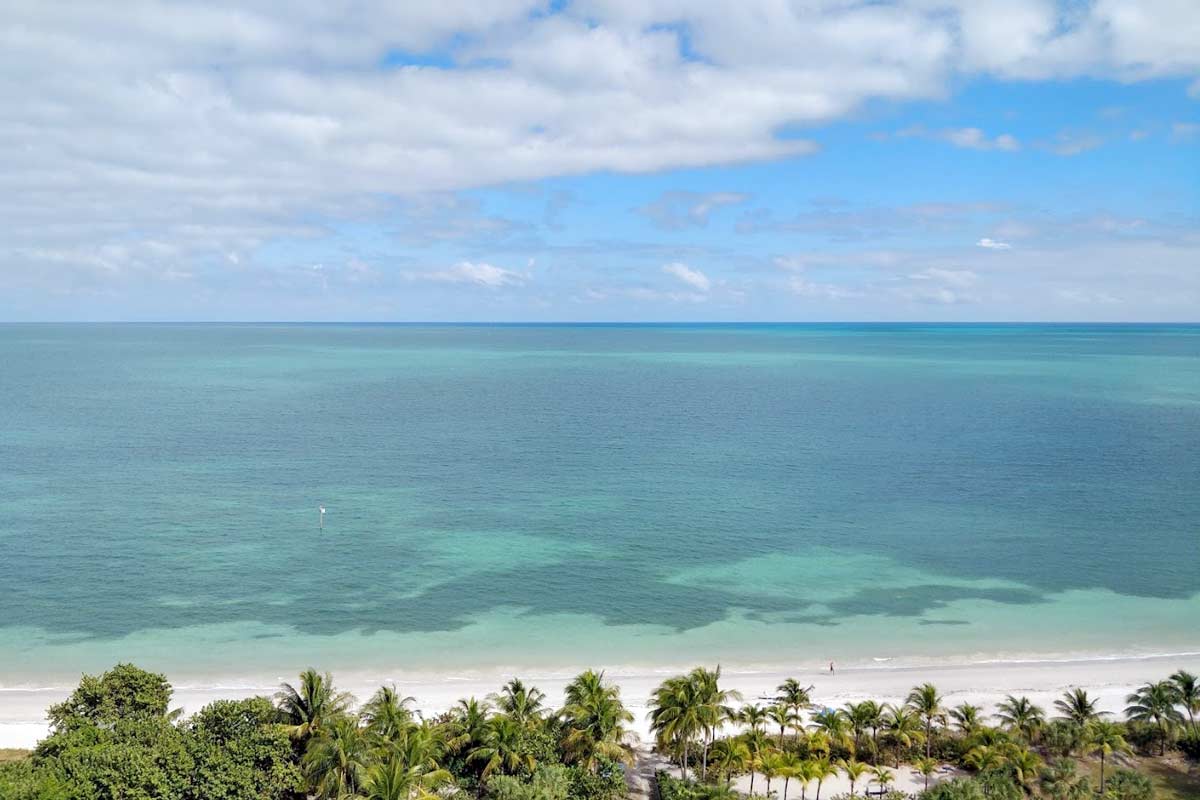 The real pros go on the weekdays.

The rest of the issue is a slog but you gotta take the good with the bad.

Told you so A few weeks ago we mentioned that a bit of a crackdown was coming by the Village and KBPD on little nuisance stuff like speeding, loud noise, etc. Now they’re here to tell us that it’s already working.

At a council meeting a week and a half ago we learned that nuisance complaints are on the way down, and that the KBPD has been busting little kids and then getting their obnoxious parents to show up to the scene and be embarrassed with them. There’s still some stuff happening, as attested by the Rag’s inbox full of complaints every week, but it seems like the crackdown is having its effect for now. Bake ‘em away, toys. 🚨

Get in line They’re vaccinating something like 2-3000 seniors a day in Dade County, but if you’re one of the chumps who still can’t get a callback from any inoculation center there’s some news for you.

The KBCF has been trying to secure slots and rides for seniors on the island, so give ‘em a call, and the Herald has a comprehensive list of all the places offering the vaccine so you can be sure to get rejected at all of them. 💉

We ate every empanada on the island

My buddy James had an idea: let’s eat all the empanadas on the island for the Rag. So we did just that, in about an hour and a half. In hindsight, maybe not such a great idea.

We went around midday and ate every single empanada we could find. Because they’re all so different in style, and availability is hit or miss, there isn’t a baseline we could compare (like cheese pizza). You would think the baseline would be a beef empanada, but many places just didn’t have them available. As such, there’s no number ratings here, just comments.

Also, we took them as they were served and suggested. It wasn’t our fault if at midday someone offered empanadas that were already getting mushy. Likewise, if they offered to heat them up, we took the offer. 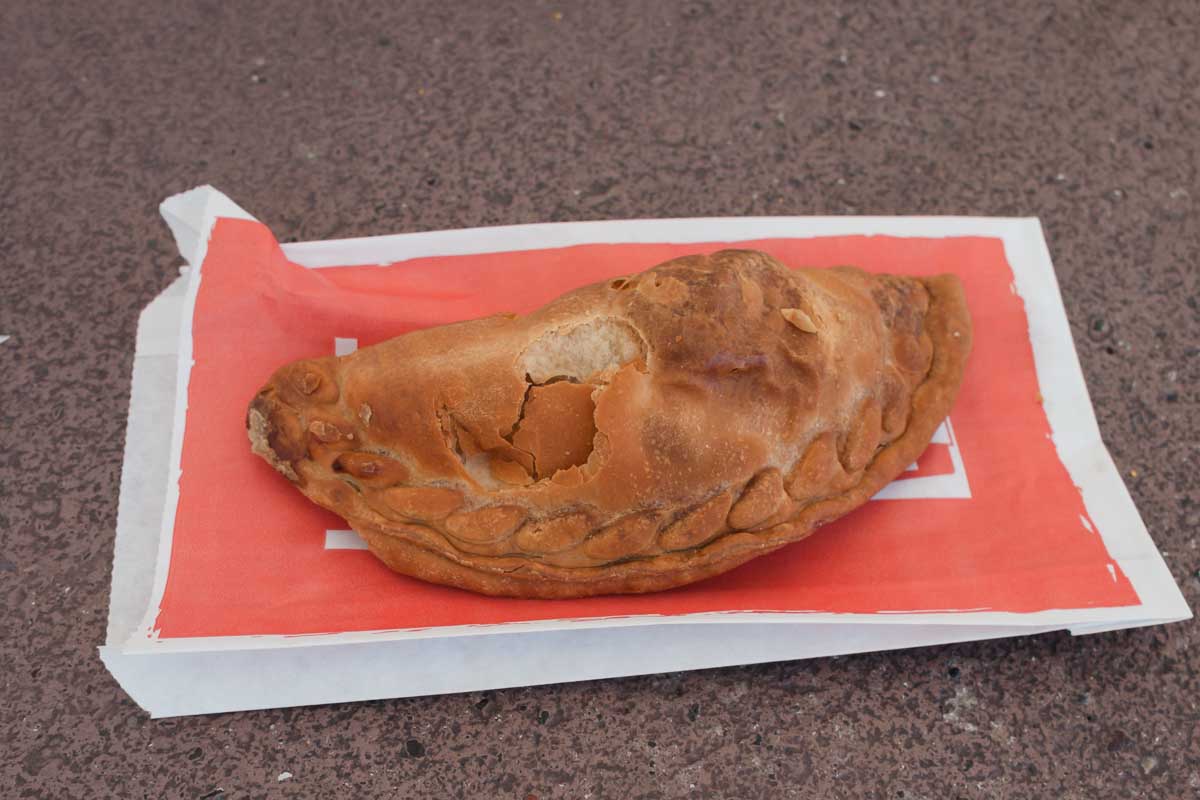 👍 Picadillo-style filling was tasty.
👎 Dry pastry had been in the hot-cab a little too long.

Summed up: It’s not offensive and it’s a good style of empanada, it’s also cheaper than anything else here, but ultimately it’s not something you want to get. You may have different feelings about it drunk at 4am. 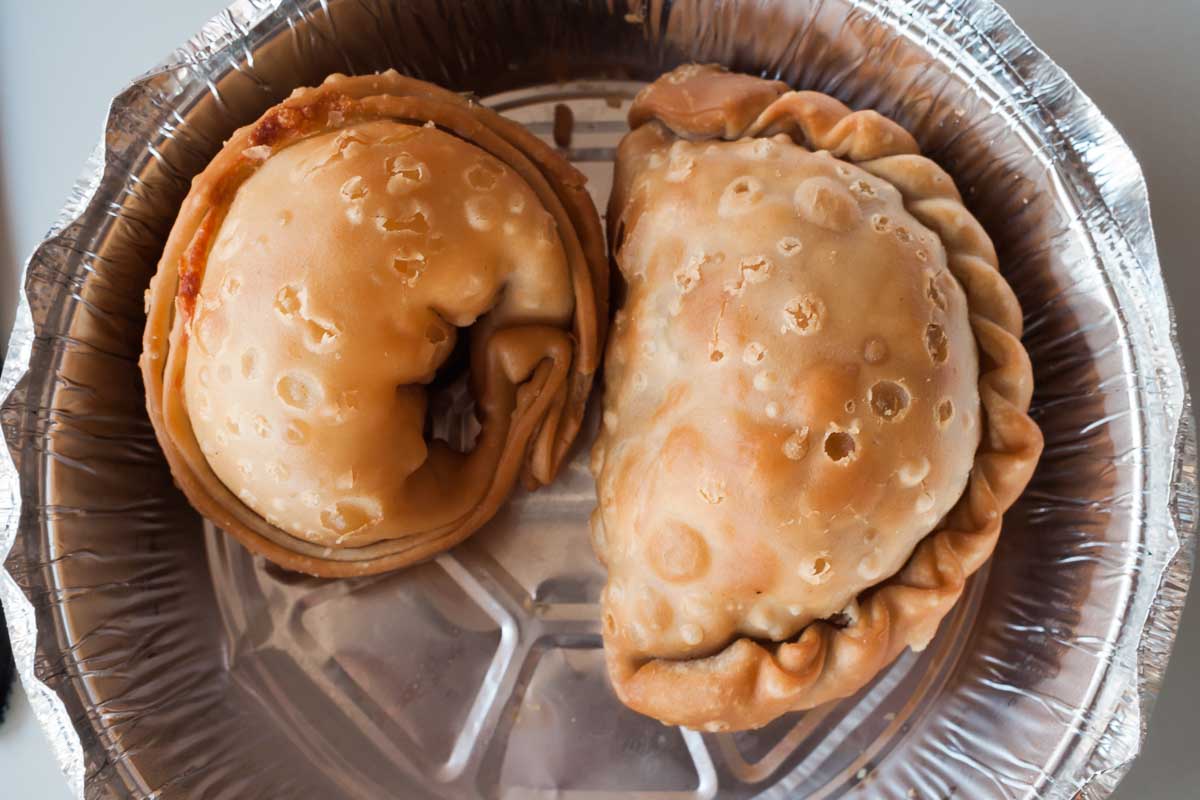 👍 The ham and cheese has a nice tang and a better pastry.
👎 Very expensive. The pastry on the meat one gets a little tough on the edges.
🥊 Jimmy James liked the beef-stew filling; Rafa did not

Summed up: The ham and cheese is interesting enough to eat again, and they always come hot, but the pastry ain’t that great and with that price it’s hard not to feel like you got ripped off. 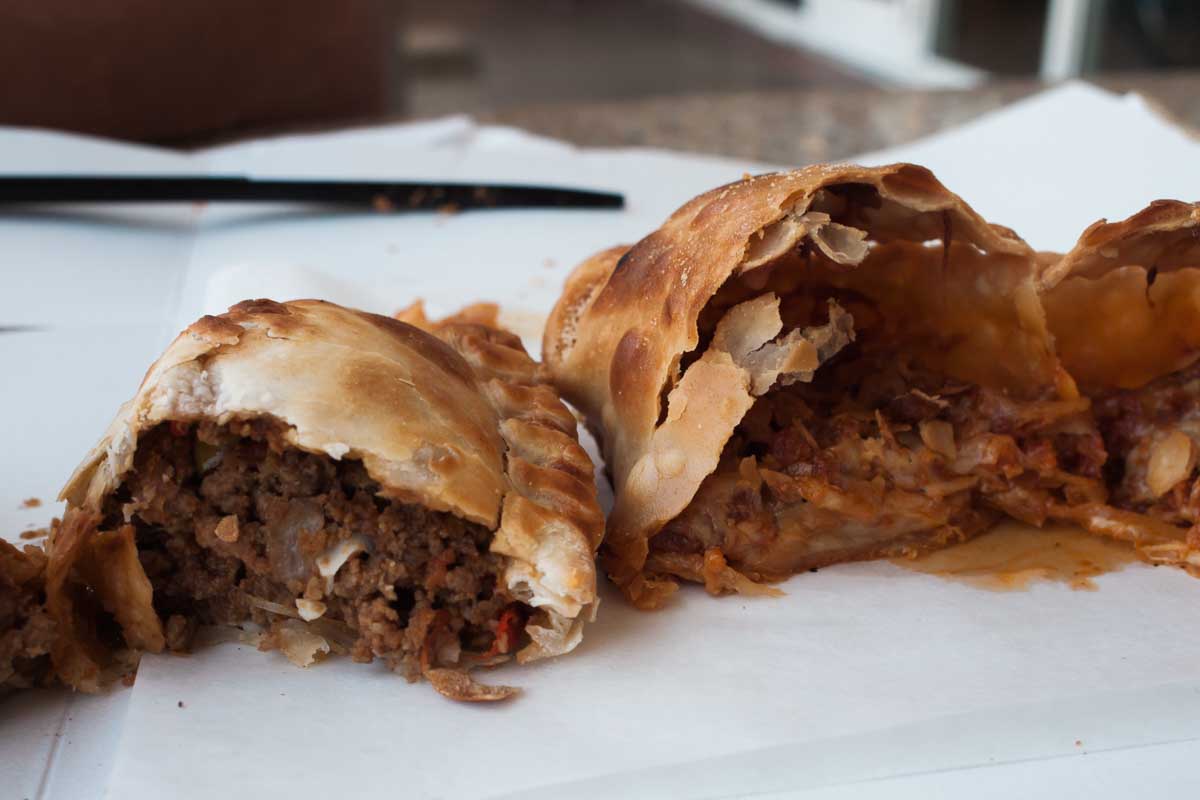 👍 Beef one has a decent filling, flaky pastry, comes out hot.
👎 Chorizo and onion is a nice taste but overwhelming for an empanada. Pastry is almost too crispy, like when you burn your toast but decide to eat it anyway and tell yourself it’s fine but you know it’s not.

Summed up: Would not seek it out, but you might be tempted to have one if you’re already there, as long as you don’t see the price. 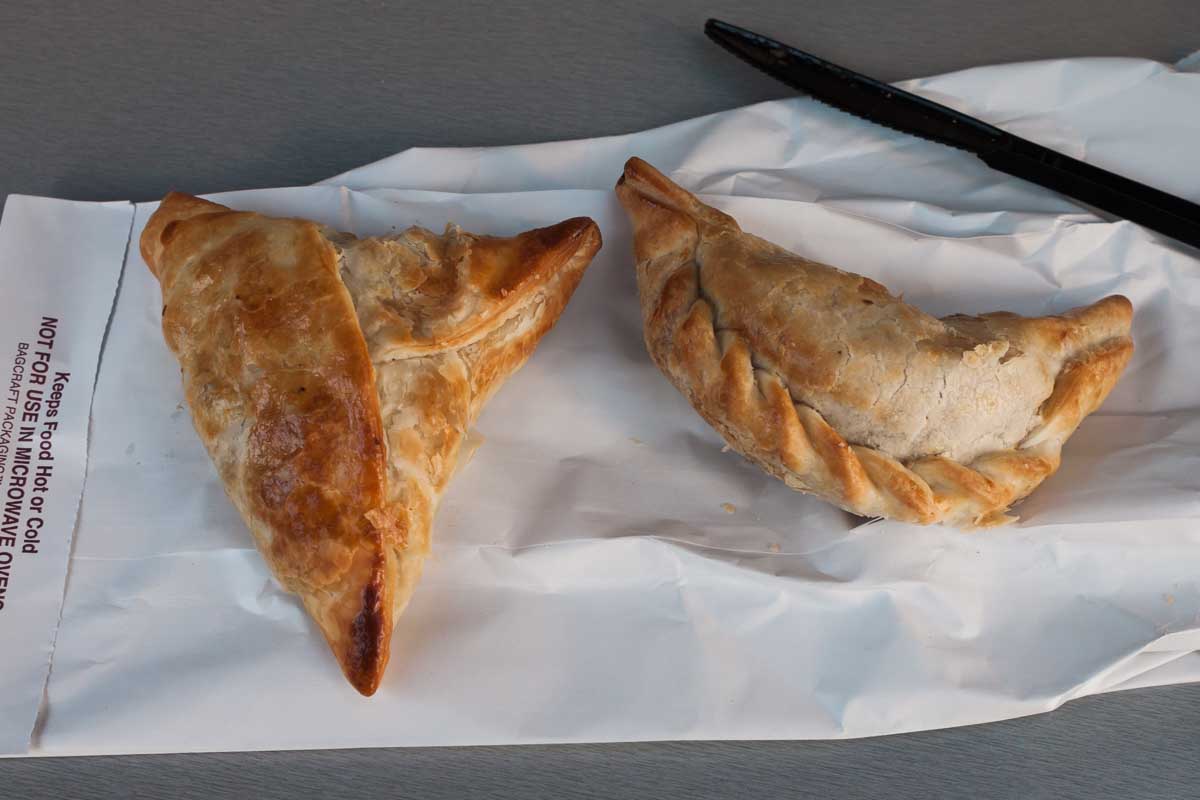 👍 They really nail it with the pastries here. Each one is not too soft, not too flaky, and buttery. Just right. The fillings are up there in taste and quality with the best of them.
👎 Some of the fillings are an acquired taste. Not always hot, but not cold.

Summed up: Overall a top contender for everyday empanada, but you probably already knew that. Big J says that if you like lemon you have to get an ‘Arabe’ every time. 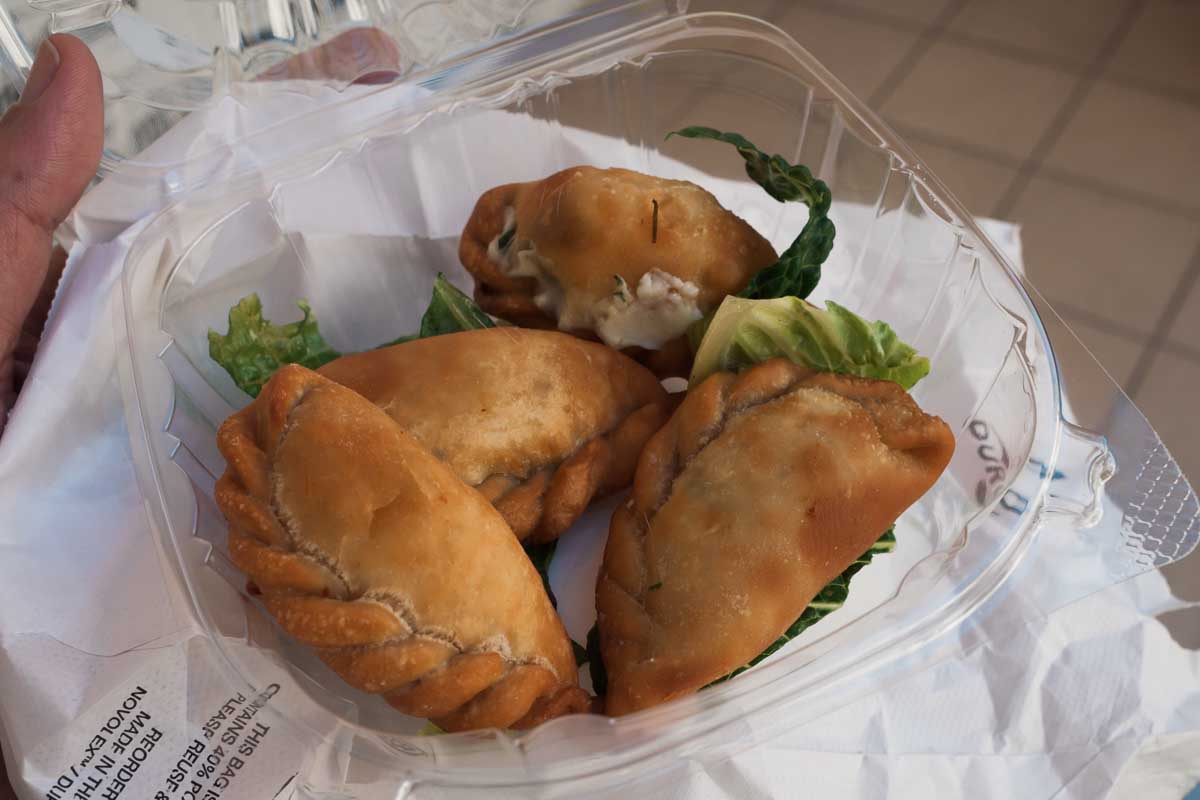 👍 Comes right out of the fryer with a great texture and tasty filling. It’s feta and mozzarella, and it had some herbs in there.
👎 If you don’t want four, you’re out of luck. Mini-sized compared to others.

Summed up: Is a sumbousek an empanada? We’ve decided it is. They come in cheese and meat varieties, but we only tried the cheese ‘cause we’re dumb. 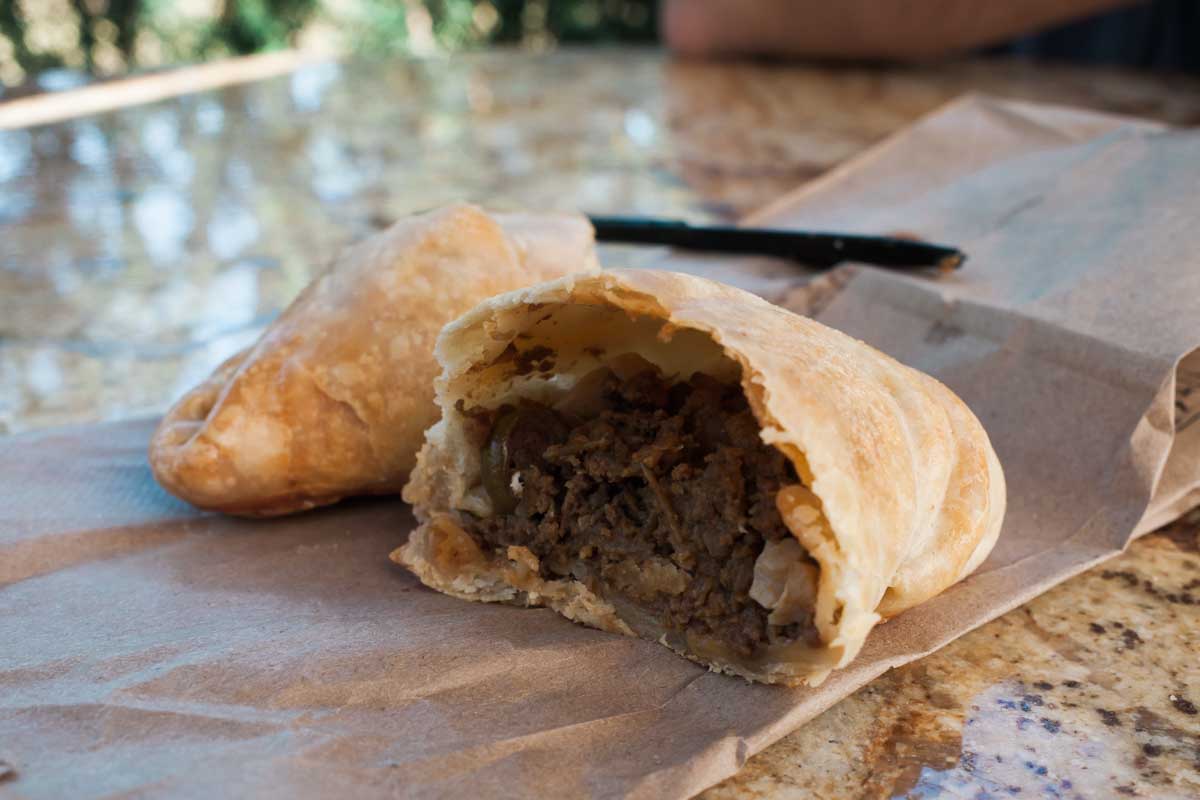 👍 Picadillo-style beef filling with a flaky pastry. Came warm right out of the little hot-cabinet.
👎 A little dry.

Summed up: There are places on this island selling way worse empanadas for a lot more money. If you catch this one early in the day it’s a winner. 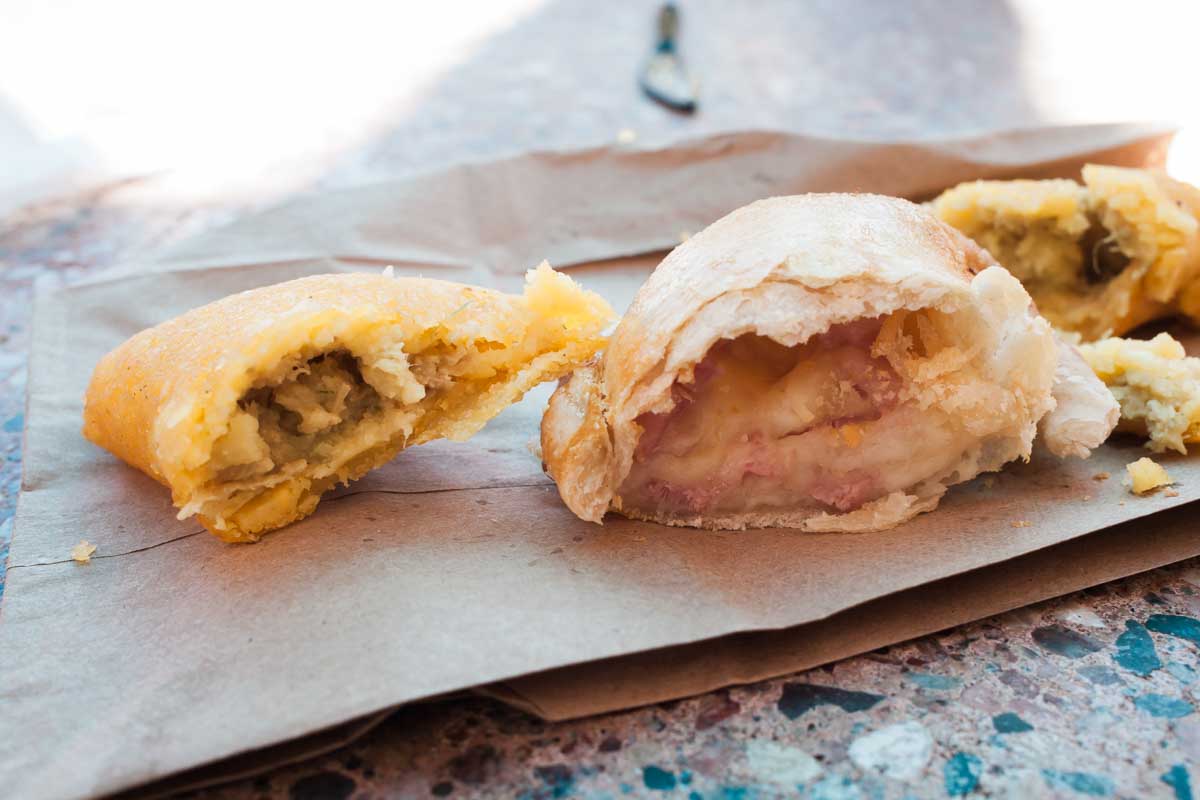 👍 Chicken filling had a rich flavor with a tasty spice.
👎 Barely warm. Colombian corn pastry was mushy. Ham and cheese was bland.

Summed up: Someone later told us that the Colombian-style was good here, but if it’s already mushy at lunch time, what’s the point? Overall it’s just not the place. 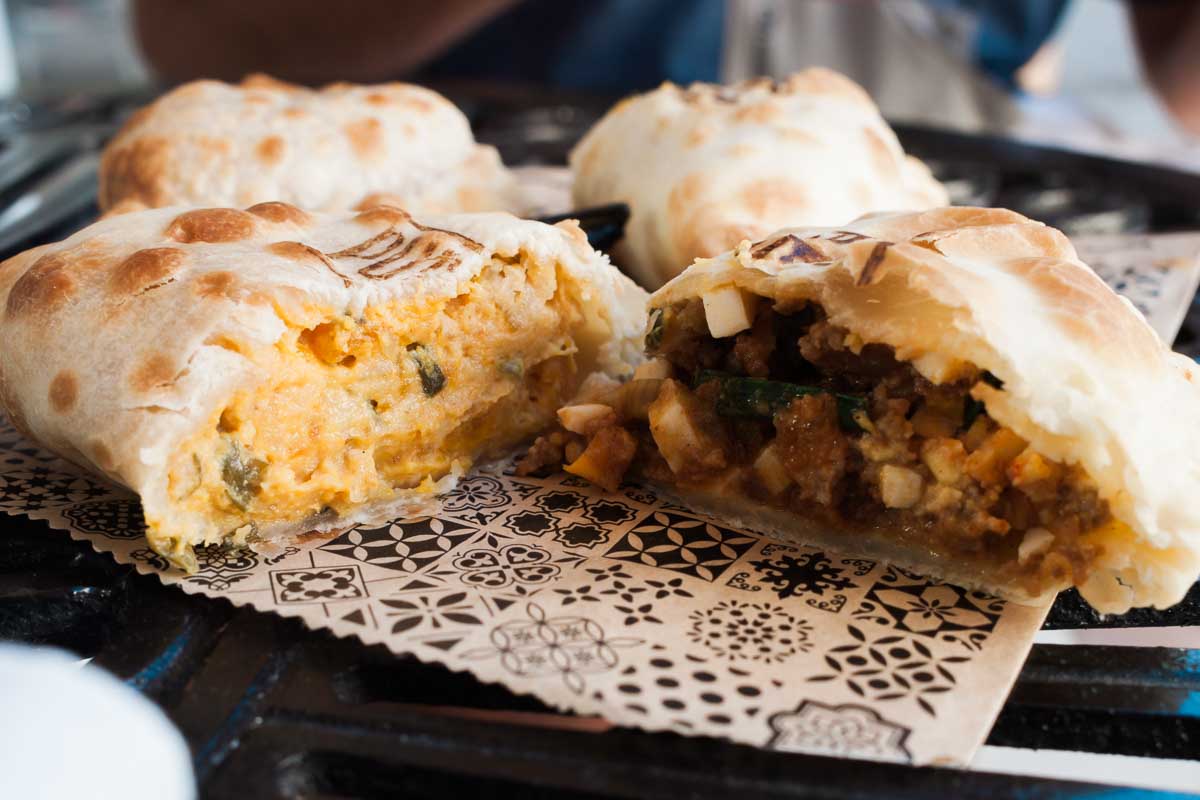 👍 The fillings here are all top notch, and they always come out hot.
👎 The pastry is a bit dough-y in a bad way. Also, we don’t need words on our food, thanks.
🥊 Jamo says the pumpkin filling was decent, Rafa didn’t care for it. Who orders pumpkin anyway?

Summed up: Another top contender for everyday empanada. And they should be, with that name. The pastry leaves something to be desired though, even if the fillings are mostly great. 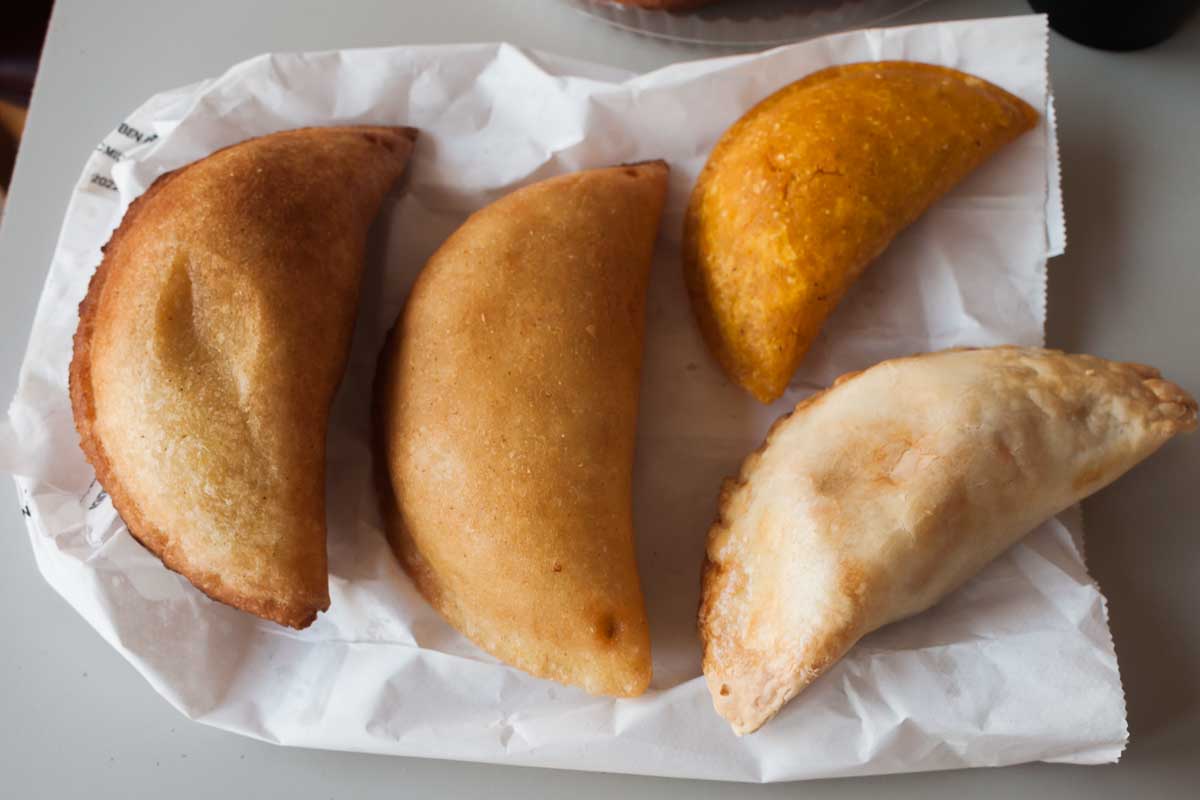 👍
👎 We both literally gagged and spit out each of these.

Summed up: Get some really bad frozen pastry from the supermarket and don’t reheat it right, and that’s what these are. Amazing they could be so bad considering we waited ten minutes for them. 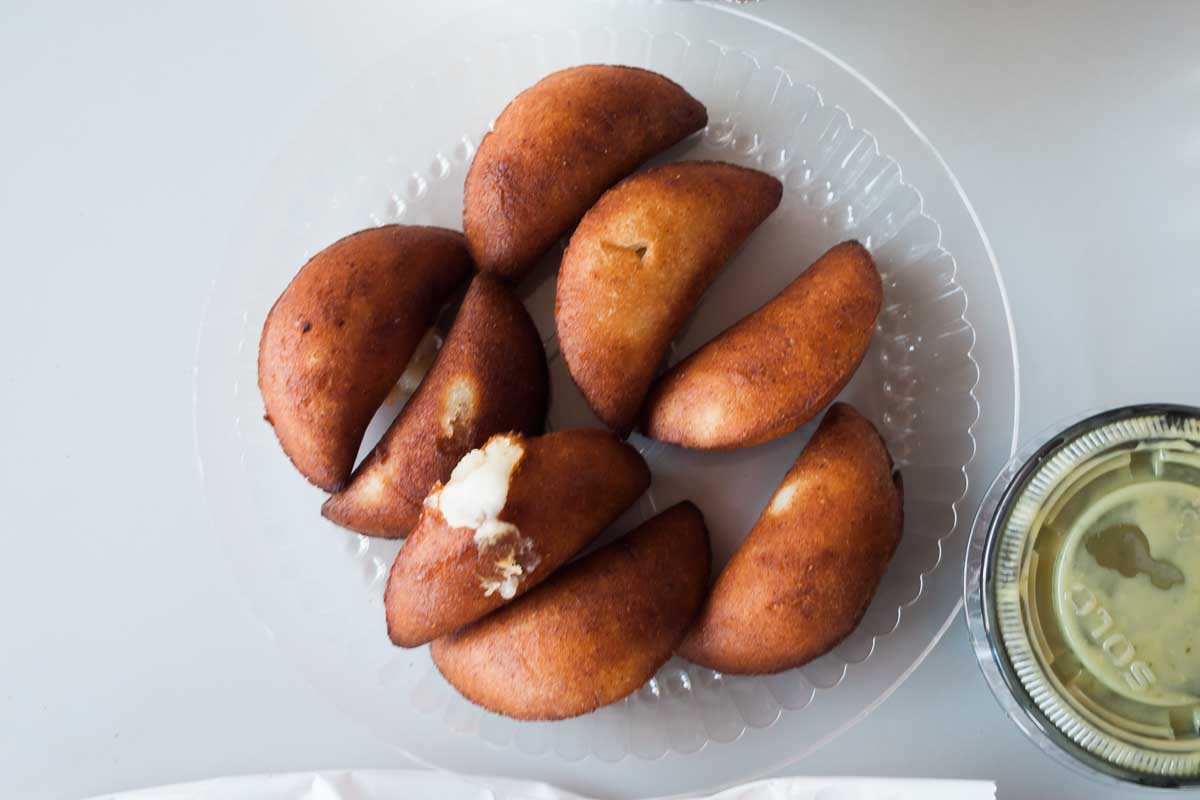 👍 A proper Venezuelan-style empanada. Just a hint of sweetness in the corn dough.
👎 The beef ones left a bit to be desired.

Summed up: This is how you do a Venezuelan-style empanada, albeit in mini form. 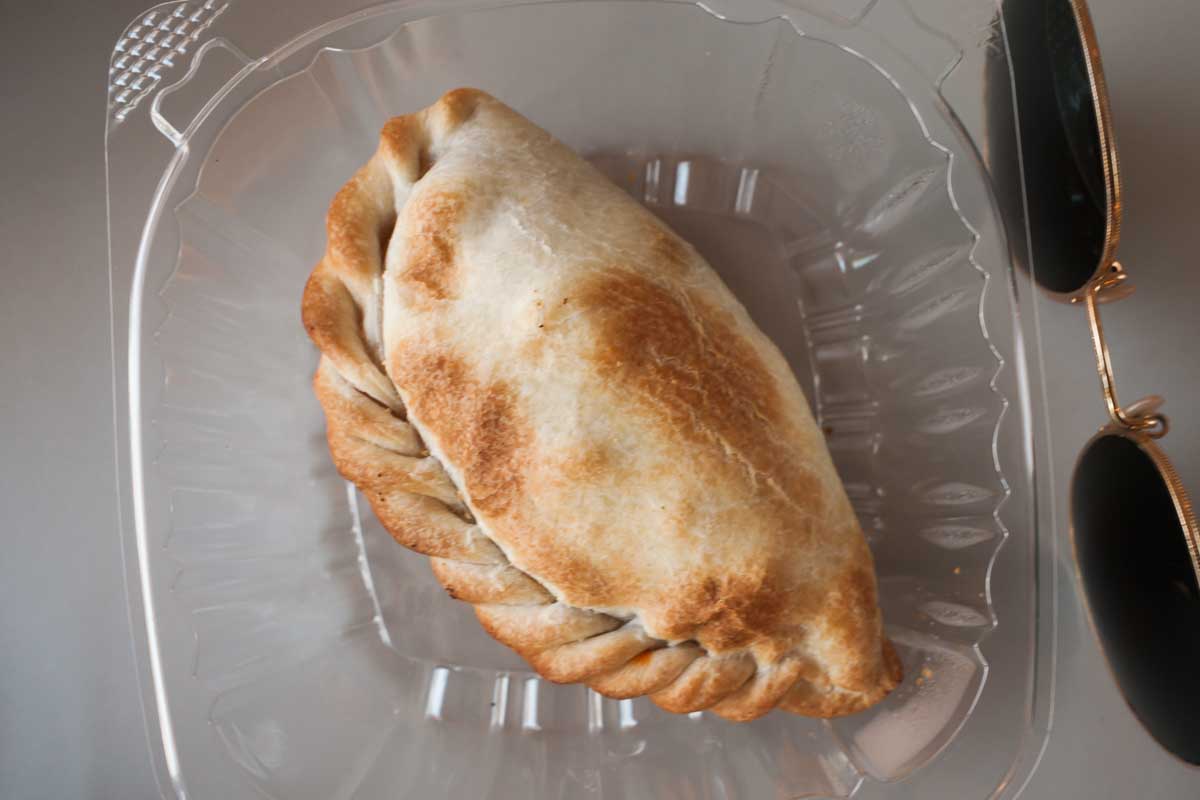 👍 Well cooked Argentine-style beef empanada, with a stew-like flavor.
👎 The pastry is bland. It tastes like it came off an assembly line. It could use some salt or something.

Summed up: It’s always hot, it’s decently priced, but it doesn’t really hit any aspect out of the park. 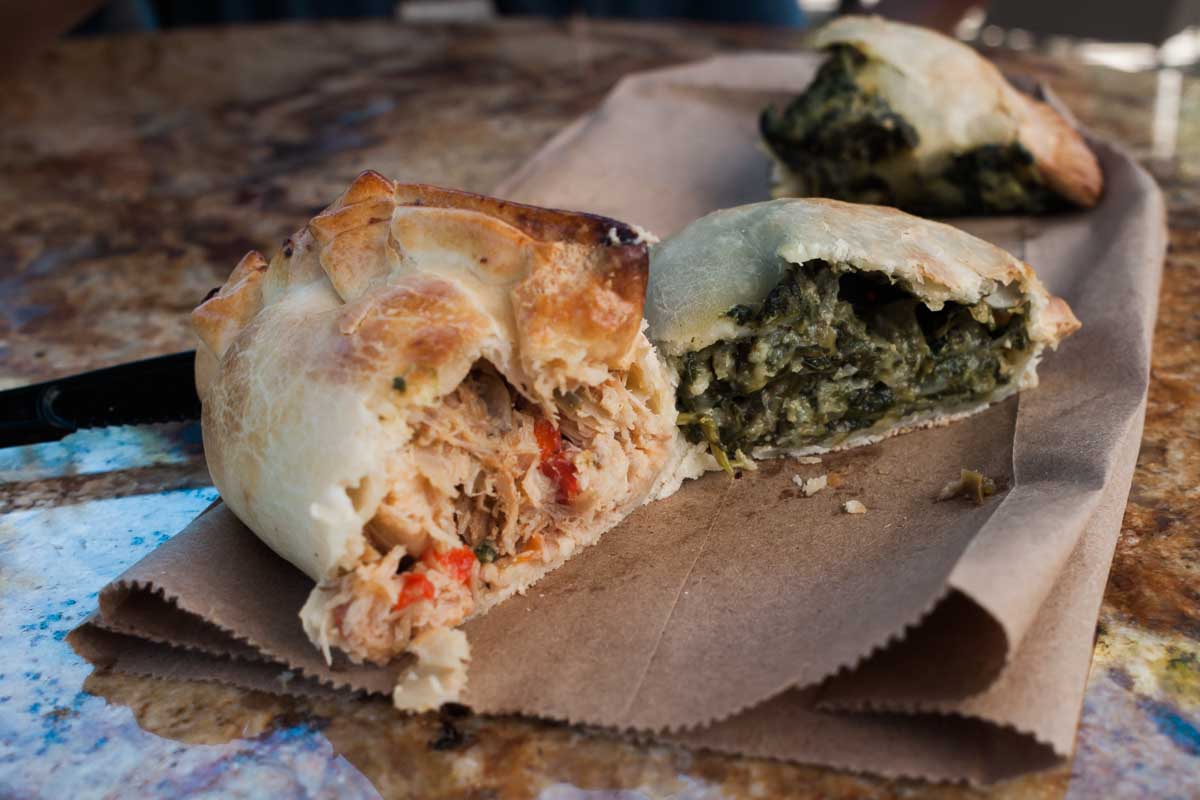 👍 Both fillings were good with the spinach taking the edge. Both styles of pastry are quality.
👎 Came out half hot, half cold as they didn’t heat it up right.

Summed up: The price is up there scraping the too-pricey ceiling, and the workers didn’t know how to heat them up, but the foundation is solid.

Some thoughts
Don’t be fooled by pastry presentation; some of the most visually pleasing are the lowest quality.

Biggest surprises
The sambousek from Pita Pockets, which was incredibly well textured and flavored.

Novecento is selling an empanada for 6 bucks.

We’re usually wary of gas station food but the picadillo-style empanada at the Mobil station had really good flavor and texture. We were also surprised by how fresh it was considering the circumstances.

Best value
Runner-up: At $2.50 and for reasons stated above, the Mobil Gas Station.

Winner: At $2.99, Patagonia’s empanadas might be the best value of any dish at any restaurant on Key Biscayne.

Jimbo’s runner-up: The Empanada’s had a very good showing but all things considered, Novecento was better, albeit at $2.00 more per empanada.

Rafa’s winner: That cheese and herb filling at Pita Pocket was the most sophisticated taste I had in this whole, gut-busting tour. Coupled with a good pastry, and it being cooked to order puts this one on top for me. 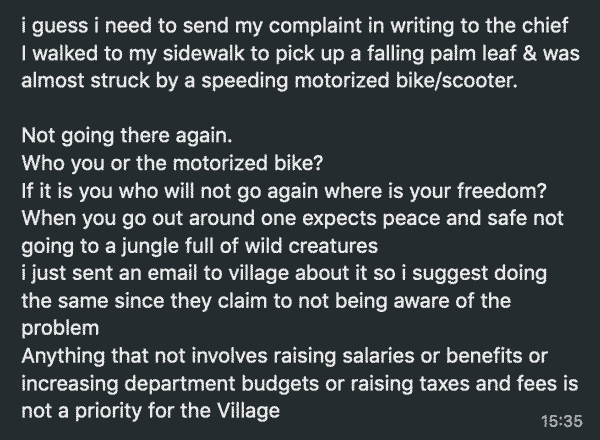 "You know where you are? You're in the jungle, baby."

Questions, comments, tips, or to plan our own food tour together 🍽, write to hi@tropicalrag.com.