Due to some technical difficulties this newsletter is here now, and not when it was supposed to be here. 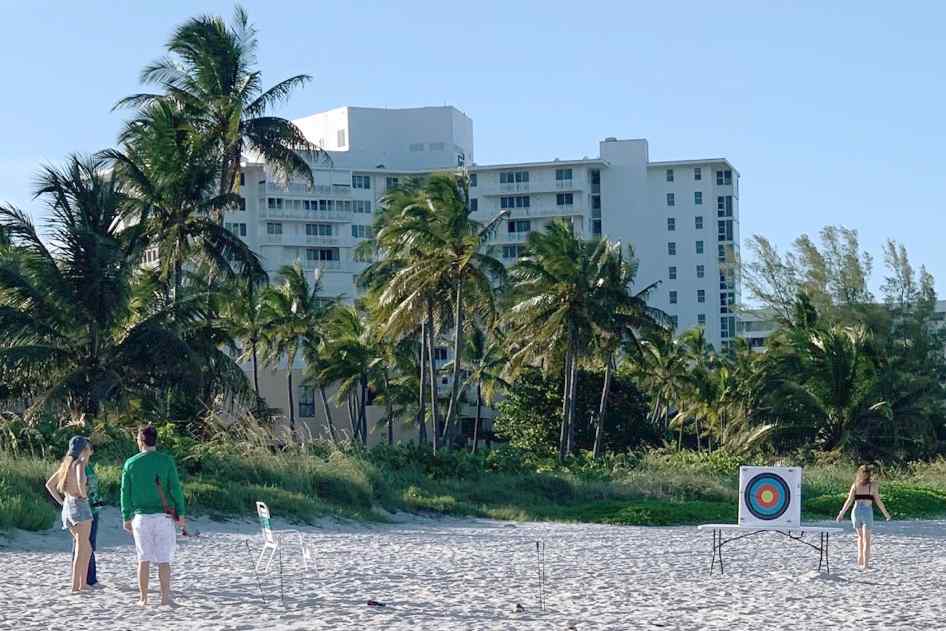 "When you've been watching too much Olympics." or "The new kiteboard rule enforcement team." 📸:Y

But it opens things up for discussion: do you guys like Thursdays? Would you prefer Fridays? Actually, can’t do Fridays as Thursday is too good a night to be tied up writing these things.

How about Tuesdays? Tuesdays might be a better choice.

Anywho, let’s get on with it.

You snooze, the news

Park life Not sure how we missed it, but apparently the Village ran a contest to name the future park space at 530 Crandon. Out of 160 entries, these were the finalists:

It’s hard to imagine how much worse the rest of the list could be if these were the best ones. It’s not a bad idea to name parks after prominent people to give a place some roots and to serve as a conversation starter (preferably dead people who can’t tarnish their own legacy; Park Vito?). As it tends to go with these things, they instead chose the most generic and inoffensive name: Paradise Park. 🥱

Talk shit, get hit Not a week after trying to explain in this publication what was going on between the KBCF and its critics, the KBCF has called it quits. They’ve gone ahead and announced they’ll no longer be working with the Village. Unlike Chief Press, a casualty of these same critics who went down without much of a fight, the KBCF is gonna hand out bloody noses all the way down: they’ve threatened to sue at least two of their most vocal critics for defamation. 🥊🍿

Rally the troops Here’s a cause we can all get behind: as reported earlier this month, Dade County is looking to totally revamp the Rickenbacker Causeway. They’re looking to make it a privately-run road, not asking us for help, and currently accepting bids. As a side bonus they’ll see how much they can screw us in the process.

The Village is trying to fight back by any means necessary, and the first step is asking you all to join this virtual meeting on August 4th that the county is hosting to make sure the Key gets a seat at the table. 🔩

I enjoyed the video. Where can I buy those pants and cod piece?

On the lake park:

As chair of the Village Landscape Group, I invite you to meet at the Lake Park and observe all critters and humans that frequent this “passive” park. There are keystone benches, bench table at the gazebo, a couple of Adirondack chairs, and grassy areas for gatherings or reading a book. Have seen adults and children checking the flora, iguanas, feeding the turtles, etc.

Grant you it needs a gazebo redo and plant replacement where we used to have butterfly attracting plants. This area serves as a water retention system for Ocean Club with noise restrictions. Village cannot drain the water or reshape the lake. We were only able to level the steep bank a bit since it was dangerous for kids to run through.

How about getting involved and come up with creative ideas to make it even better?!

I didn’t understand what the dust-up over the KBCF was until you unwound it for me. Meanwhile, Melissa sounded suicidal in the Islander. Doubling down, Pepe, too, has fallen off his perch.

Too many comments in support of the Key Biscayne Community Foundation and its director Melissa McCaughan White here and elsewhere begin with the disclaimer that she is a friend or has involved them on a project. That only shows how integrated the foundation and its director, a Key Rat, are in our community. KB Foundation jumpstarts projects–Covid testing the prime example–that stump everyone else. It finds ways to enlist everyone from winter resident to top government officials.

I remember bicycling by St. Agnes one morning early in the testing and seeing Melissa and the fire chief–loaded down with boxes–walking to the site. Citizens and village officials working together for the community. What could be more in the spirit of the founding of the Village of Key Biscayne? My disclaimer? Yep, I know Melissa because I became involved in the community. I’ve worked with her on projects like tai chi and Key News, I’ve profited from the Foundation through its free visiting housekeeper program when I had a knee replacement. I attend Citizen Scientists programs in person and by Zoom. She and her staff go a long way to making Key Biscayne an “Island Paradise.’ Shame on those who drove the Foundation away.

Your moment of zen

It’s not every day we get someone ranting about the FBI and other bizarre topics at a council meeting, a guy who ran for council no less, but hey, here it is.

Questions, comments, tips, or to make our own island olympics together ⭕️, write to hi@tropicalrag.com.

Better late than never! See you next week.